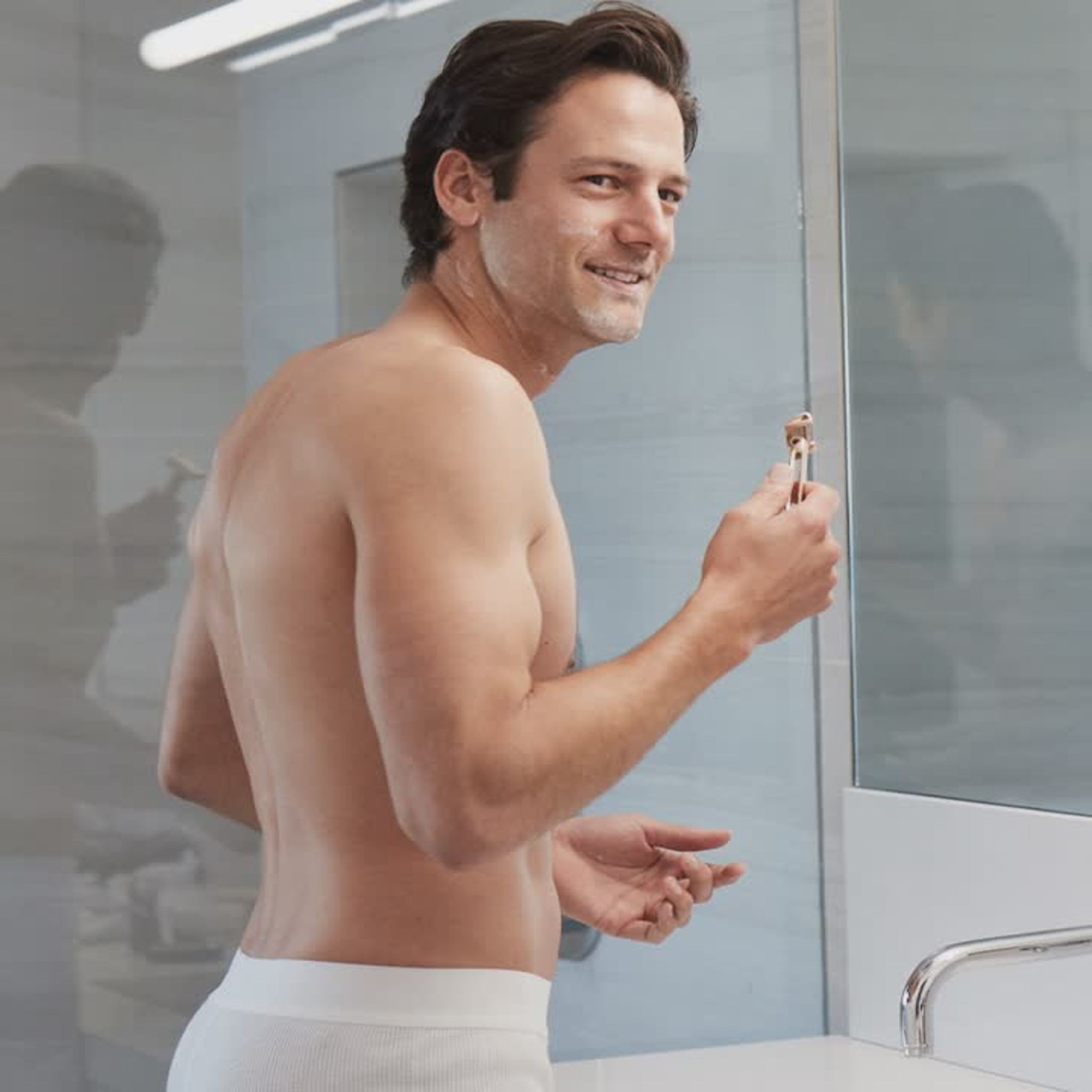 Over the course of a lifetime, you’re going to have a lot of morning shaves. Day after day, running that razor over your skin can take its toll—especially when you’re applying way too many bells and whistles.

As the number of blades on mass-market razors stacks up, so do the claims of pulling and tugging so the slicing can go below the surface. 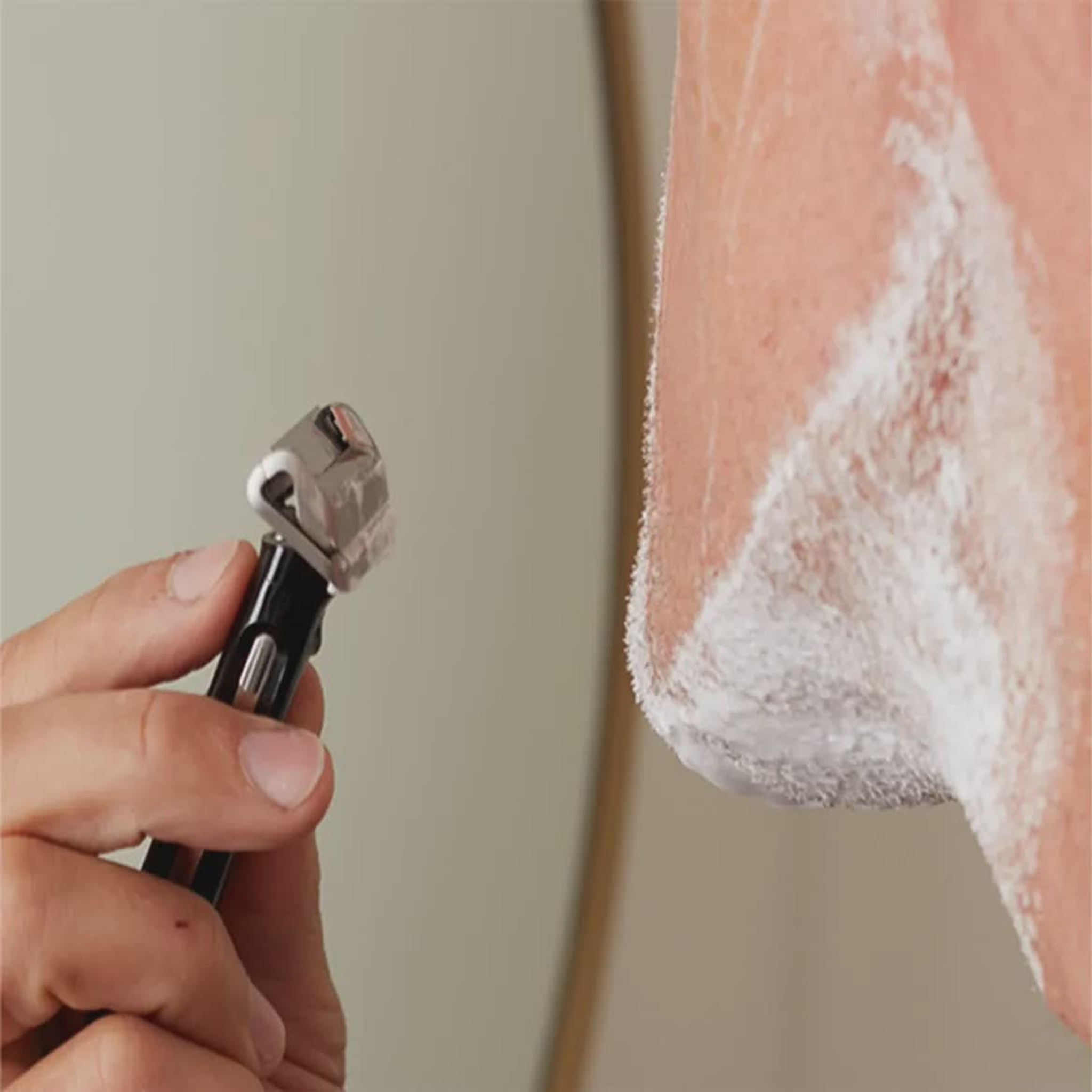 THRIVE WITH A SINGLE BLADE

Extreme closeness doesn’t count for much when it’s coupled with irritation and inflammation. With a single blade, you can shave right on the skin’s surface, not beneath it in the land of redness and razor bumps. If the science behind shaving taught us nothing else, it’s that only the first blade does the work. Everything else is irritation.

With the specially engineered angle, pivot, and sharpness built into our design, you’re set up for a close but skin-loving shave without having to think about it.

Try any Razor for 60 days. If you don’t like it, send it back for a full refund.

Your face will thank you for it.

Free US shipping on orders $75+

Free standard shipping on all domestic orders over $75.

All of our razors are guaranteed for life. And your son's life, and his after that.

If you’re paying attention to your shave, you shouldn’t just stop at the razor—we worked just as painstakingly to precisely combine ingredients in our Shaving Cream and Aftershave Balm that cares for your skin, and let you put your absolute best face forward.

That’s half the shave. We’ve blended our Shaving Cream with lavender oil—the number-one must for anti-inflammation properties—safflower oil to retain moisture, and sweet almond oil to actually dislodge impurities from the follicle and deliver vitamins so you’re hydrated, lubricated, and packing your skin with nutrients. Mix in some aloe vera and other moisturizing ingredients for good measure, and your face is left feeling incredible.

The other crucial element to your shaving routine is a good, alcohol-free aftershave for skin regeneration, repair, and protection. The cornerstone of our aftershave formula is SyriCalm, a natural product derived from poria cocos and phramites—believe it or not, a mushroom and a grass. That’s the magic combo needed to support skin against external stresses like shaving and help skin recover its natural balance. Throw in some antioxidants like CoQ10, aloe, witch hazel, avocado oil, and more, and you get a moisturizing formula that can be used across all skin types for maximum protection and relief.

a real life story from Neil, a OneBlade GENESIS customer:

"This razor really is awesome. I've done every cartridge razor system under the sun: Dorco, Dollar Shave Club, Harry's, Gillette, Schick, you name it, I've tried it! Every single one was just horrible. It might be okay for the first shave of the week and then the next day it'd just hurt. I then moved on to double-edge and single-edge razors. They were nice, but even when I mastered the technique I just couldn't shave as quickly as a cartridge. Some people are able to shave in 5 or 10 minutes with a double-edge, wish I was one of those guys, but a 3 pass shave with a double edge would take me 20 minutes!

So I had no choice but to use cartridge razors because of their ease of use. Then the Genesis came along; it was like it was made for me. I was able to shave just as quick as cartridge but just as efficiently as a double/single-edge razor!

After a week of use, my skin just cleared up. I thought I had maybe mastered my soap technique, but I most recently went on a trip to New York and didn't want to risk travelling with my Genesis. I used a Gillette cartridge razor, it was nice on the first day, mowed the hair, then just started hurting a bit the rest of the week. Then started getting red on my neck, and ingrown hairs on my face and neck. NOOO!

Got back home and have used the Genesis for about 4 days so far and my face is already clearing up. It is really that crazy. Sure, its expensive and I went back and forth like crazy deciding on buying it, but I'm definitely glad I did!"